One of the non MouseFest activities that we were excited about was the opportunity to meet author David Koenig at Reading Trout Book Store in Celebration on Friday evening. We had planned to attend this event ever since one of the owners e-mailed me to let me know that author David Koenig would be speaking about his new book Realityland

. Jason Surrell, Imagineer and author, was there on Saturday evening, but we had already purchased our tickets to Matt Hochberg’s StudiosCentral Fantasmic Dessert party (which was awesome!). I planned on bringing my copies of Mouse Tales and More Mouse Tales for David to sign.

I had just finished Mouse Tales

and I was halfway through More Mouse Tales

during MouseFest. I enjoyed Mouse Tales tremendously and I was very excited to meet David and hear him speak. I had printed a map from our hotel to the book store and had corresponded with Adam (one of the co-owners) via e-mail. We spent Friday morning at Animal Kingdom riding Expedition Everest, meeting Ray and Nancy, getting coffee for Lou and receiving a personal DSI of Restaurantosaurus from Jeffica (Jeff and Jessica). After an abusive lunch at Flame Tree Barbecue (where I was formally denied access to the Crate Appreciation Society), we left for the Disney-MGM Studios. We met up with Lou (that guy is everywhere) and Jessica while we waited for Jeff to show up (probably getting Lou some more coffee). We hung out with Mike N. and Len from the WDWToday podcast until the Star Tours meet sponsored by StudiosCentral. The Starspeeder 3000 trip was amazing, as usual. Afterwards, we wasted time until the podfest meet. While I hung out and schmoozed, Andy got his ride fix over at Rock n Roller and Tower. We met up at 6:00 and headed out of the Studios to get some food and find our way to Celebration. 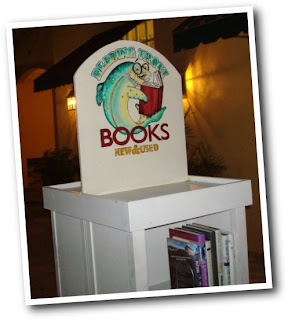 The ride was fairly quick, although Google led us down the toll road. We circled parts of Celebration looking for parking before I called the book store. They we very excited and told us a place to park about 4 blocks away. Celebration was celebrating Christmas every evening in the Town Square with snow, hot cocoa, sleigh rides and train rides. Needless to say, the town square was blocked off and parking was at a premium.
Walking through Celebration was pretty amazing. I had been there in 1997 and ten years had made a huge difference. The town was packed with people in the restaurants, shopping, drinking hot chocolate and enjoying the festive atmosphere.

We rounded the corner after the Celebration movie theater and saw the book store. We went in, met the owners and walked around the store. I have to admit that they had a very impressive Disney book collection. We saw David working on his presentation so we sat in the chairs near the screen. There were only a few people at the beginning, but it was standing room only after a few minutes into the presentation. 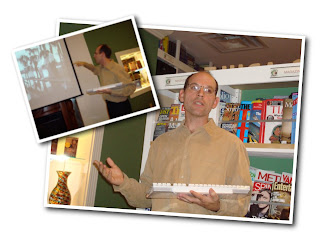 David spent about a half hour talking about his new book, Realityland and the creation of Walt Disney World. After writing Mouse Tales, David told us that he was approached to write a similar book about Walt Disney World. After visiting WDW for the first time, he realized that it would be a formidable task writing a book about a project as big as a city. But he was excited by the opportunity. David led us through the first couple of years of the Florida project (also called Project X), including the history and much delayed construction of the Contemporary (Tempo Bay). David shared a lot of pictures from the early days and some wonderful stories about Roy, the construction workers and other key players. Apparently, Disney had to purchase four times the needed shower heads and other furnishings due to the theft issues. 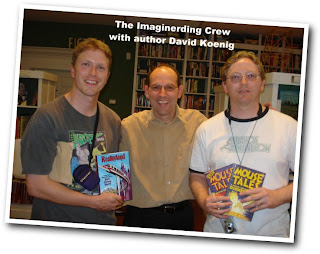 Afterwards, David spent a few minutes answering several excellent questions and he had great answers for all of them. The most intriguing ones dealt with Epcot and Celebration and how the other WDW parks were all being slowly transformed into Magic Kindgoms.

Andy and I each bought a copy of Realityland and David signed all of the books for us. He was very friendly, informative and accessible. If David comes by your area, make sure to check him out! You can also read his columns over at MousePlanet.