Andy and I had a great time at MouseFest last week. When we weren’t attending meets, we were busy taking pictures of trash cans, crates, signs and every book we came across.

Yep…we even found books at Walt Disney World. Countless people were waived politely past us as we strained to get a picture of a book on a shelf in a queue, in a restaurant or during a ride. We were amazed at the amount of books that Disney has used throughout the parks.

I know…I am such a book nerd but Andy is such an enabler! 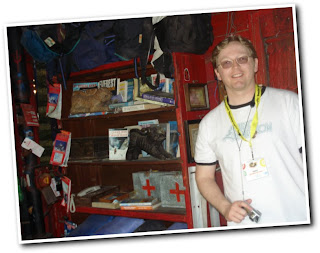 I’ll tease you with the first book we found this trip, but it deserves a special post all by itself. Zip-a-Dee-Doo-Da. ‘Nuff Said.

On our second day, we joined the MouseFest throngs at the Animal Kingdom. Our intent was to get me on Expedition Everest as many times as possible. The first time through the queue, we were shocked at two things: it was walk-on with no wait and there were books everywhere. We did the stand-by twice, FastPass a third time and single riders for the fourth ride. During the FastPass wait, we saw a great little stand that looked like a vendor/shop area. They sold first-aid kits, packs, maps, magazines and books about the Himalayas, mountaineering and the Yeti. It was very cool to stumble upon that.

After a scrutinizing the display area and getting as many pictures as possible, I noticed one of the coolest details that I have ever seen in a Disney Park. 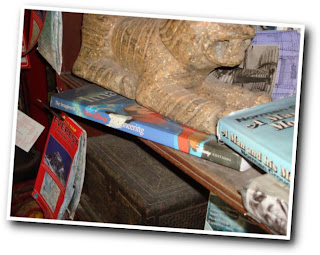 In the picture above, there is a light brown wooden carving of an animal. Underneath it is one of our favorite Disney books. Take a close look.

Yep. It is Walt Disney Imagineering: a Behind-the-Dreams Look at Making the Magic Real

We have talked about this book quite a bit at Imaginerding. It is the one book that everyone should have in their collection.

It was such a great moment. Out of the hundreds of books we saw in the queue, somebody in Imagineering felt it was important to add this book about themselves to this monument of a ride. A monument to Imagineering and the art of storytelling.

As we always say at Imaginerding: It is in the details. Make sure you take a moment the next time you are in the parks to stop, look around and be amazed.