Skip to content
I’ve been a fan of the West Coast Disneyland Old-Timey photos ever since I stumbled onto Gorillas Don’t Blog, Stuff From the Park and Davelandblog.
Dave also runs three other blogs: Haunted Mansion, Jungle Cruise and Pirates of the Caribbean. He is also the webmaster for Daveland, which has the COOLEST interactive map of Disneyland that I have ever seen. If you ever have any questions about Disneyland past, present or future, head over to Daveland and check it out. You will not believe the number of photos that he has on his site. 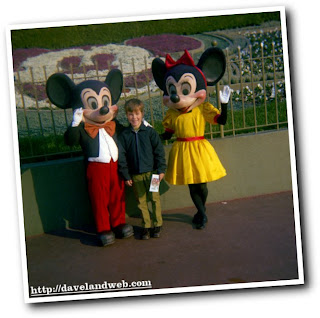 What is your single favorite attraction?
Always a tough one, but I’d have to say Pirates of the Caribbean; used to be the Mansion, but I think (at least at Disneyland), the Bride area revision has kind of goofed up the fun Marc Davis/Rolly Crump humor.
What is your favorite Disney and non-Disney movie?
Favorite Disney movie: The Parent Trap.
Favorite Non-Disney movie: The Wizard of Oz.
What is your least favorite park?
California Adventure. Why would I want to see a bland (and cheaply done) recreation of the state I live in when I can visit the real thing? However, I do have a lot of faith in the new plans for it. EPCOT was also somewhat disappointing; probably because I’d read what Walt’s original intentions were for it. They definitely dumbed that one down.
What is your favorite Disney song?
Feed the Birds by the Sherman Brothers.
If you could switch places with any historical or living Disney employee, who would it be and why?
Probably Bob Gurr. He was involved in so many of the cool projects at Disneyland (viewliner, monorail, autopia), and he definitely had a can-do attitude as well as the respect of Walt.
What is you’re must eat drink/food at DL? 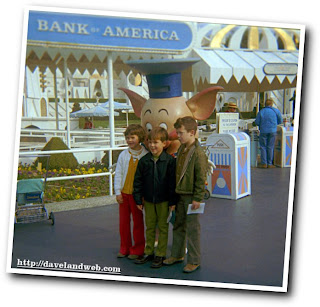 A Tinkberbell Twist to drink…available at the Fantasia Freeze cart near the Matterhorn. It’s a Sour Apple & Sour Watermelon slushee “twisted” together. For food, it’s a Monte Cristo at the Blue Bayou (my fave DL restaurant). Pretty much a heart attack on a plate. (Ed. note: probably my favorite Disney food of all time…mmm…Monte Cristo…)
Favorite place to stay at DL?
The Grand Californian. What a place! Probably the one thing of the DCA project that they DIDN’T skimp on! The Napa Rose restaurant inside the hotel is also a favorite.
What is the first thing you want to do on your next trip?
Take the Grand Circle Tour on the Disneyland Railroad. I could just sit on that train and ride it for an hour…great theming at the stations and in between as well.
How did you develop your love of Disney?
Back when I was a kid (I’ll try not to repeat this phrase too much), the Disney classic movies would be re-released in the THEATERS (not Home Video!) on a set schedule (I believe it was every 7 years?). So, I was raised on Disney for as long as I can remember. Getting to see the classics in the theater as a little kid is probably my earliest memory. Mom also bought me the classic Christopher Finch book “The Art of Disney” when it came out. What a classic! I read that book at least a million times!
If you had to choose Disneyland or Disney movies, which would it be?
That’s a tough one…but I’d have to say Disneyland! It was the culmination of Walt Disney’s dreams; EPCOT could have been, but as I mentioned before, it ended up being a bunch of safe and uncreative choices.
Which Disney character is your favorite?
Dopey is my fave; I think he’s much smarter than he looks. He knows how to work it; how to get an extra kiss or two out of Snow. The guy definitely has schmoozing abilities.
Does any forensic evidence exist linking you to the Kennedy assassination?
Considering I was born in 1964, probably not; however, I did once discover a yellowed copy of the JFK assassination newspaper headline in my parent’s attic; coincidence?!?
Would you make any major changes to the current design of any of the parks?
Heck yes! I would revamp Critter Country and Toon Town. Critter Country is such a waste; I’d rip out Pooh, put the Country Bear Jamboree back and also bring back the Indian Village. How cool would it be to experience the Indian culture like they did at the park originally?!? Or even better yet…put a “live” Indian Village on the Rivers of America where the “fake” indian village is.For Toon Town, I’d let the Trolley start working again (who was the brain trust that bolted it into the ground?!?) add at least one more attraction (Mickey’s Fantasis ride perhaps?), and put in a restaurant with Toons as the wait staff.
What is the most significant architectural feature of DL? 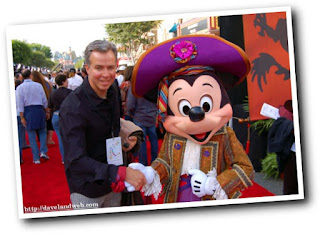 New Orleans Square; they captured the real city and removed all the crud! Not a whiff of vomit anywhere! Seriously though…I love the way the streets wind around…it makes it feel much bigger than it actually is.
Where do you spend most of your time online when in the Disney-sphere?
Probably the other vintage Disneyland blogs: http://matterhorn1959.blogspot.com/ and http://gorillasdontblog.blogspot.com/ are the faves. I have to give shout outs to the entire Disney Blog community; what a great bunch of people; I have “met” so many cool people in the year or so that I’ve been blogging. And George – you are one of the best! Too bad you’re on the wrong coast! (Thanks Dave, the check is in the mail!)
What do you consider the most historically significant or defining moment in Disney history?
I would say the 1937 release of Snow White.
How do you feel about Disney’s stance to remove Song of the South and other period specific pieces from its association?
Absolutely stupid. Give me a break…what a tempest in a teapot. I would wager that the people complaining about the stereotypes in “SOTS” have probably never even seen it and really need to get a life. If Warners/MGM can continue to make a mint off of “Gone with the Wind,” then there’s no reason that Disney can’t release “SOTS.”
Don’t forget to stop by our site and leave some Disney Geek love!

8 thoughts on “Meet Our Neighbor: Daveland!”