– Your “port of entry” for Walt Disney World adventures. Monorail trains, ferry boats and motor trams carry arriving guests from this area across and around the Seven Seas Lagoon to the Magic Kingdom. Ticket booths for the Magic Kingdom, Guided Tours, Guest Relations, Public Lockers and Lost & Found are located here, as is the “pet motel” – the Walt Disney World Kennel Club. 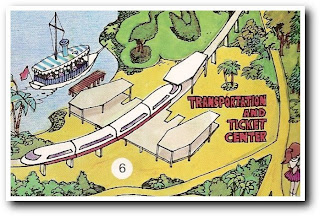 The Transportation & Ticket Center was created with the intent of allowing day visitors and resort guests to leave their car while visiting the Magic Kingdom or while on a week-long vacation. You park and use Disney transportation for your entire stay! No need to drive anywhere. Of course, if you visit any internet forum the Disney transportation vs. car debate has pundits on both sides.

As often as not, the rumors always surface about expanding the monorail line to the Disney Studios and the Animal Kingdom. When the Epcot loop was built, the running total per mile was estimated at one million dollars. Wow. That’s a lot of cheese. Originally, the monorail was planned to travel to the Lake Buena Vista area, or the Downton Disney Marketplace as we know it today. As what frequently happens, the best-laid plans of mouse and men go astray. This plan was shelved after the energy crisis on the late 1970’s.