Walt Disney: The Triumph of the American Imagination by Neal Gabler

Clocking in at 851 pages, this is the longest non-Harry Potter book that I have ever read. The text itself is only 633 pages with an additional 171 pages dedicated to Mr. Gabler’s notes and research. A bibliography, acknowledgements and the index round out the rest of the book. 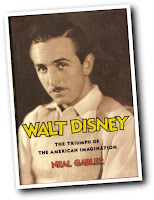 This release was heralded as a true, in-depth look at Walt Disney’s life. Not quite the glossed-over corporate biography by Bob Thomas nor as dark and mis-leading as Hollywood’s Dark Prince. It has also been compared to The Animated Man by Michael Barrier.
Mr. Gabler spends a lot of time discussing Walt’s early career in animation. I came away from the book with one over-arching theme: control. According to Mr. Gabler, Walt spent most of his time and creative energies looking for control. Whether it was running from his father’s control or seeking his own by creating animated worlds and theme parks; Walt was always looking for a perfect and controlled world. The work is broken into four main parts: we see his early life until he leaves Kansas City; the animated days in Hollywood; the live-action films; and, ultimately, Disneyland and the beginnings of the Florida Project. In each era, we see Walt rise to greatness and break barriers until he ultimately loses feeling for the project(s) or loses his ability to control every aspect. Mr. Gabler supposes that Walt actually lost interested in animated films after completing Snow White. He realized he could never actually top it.

I would recommend this title if you have read other Disney biographies and you are looking for more information about his animation career and how he ran the studios. It paints a picture of Walt that doesn’t jibe with the corporate symbol that has become the myth. After reading the biography, Walt does seem more intent on controlling everything and it is obvious that the animation strike hurt him deeply. He never quite regained the trust in his animators after that.

I will reserve full judgment on which Disney biography to recommend until I have read Michael Barrier’s The Animated Man. For now, Gabler’s work is very exhaustive and focuses very heavily on the period from the 1920’s to the latter part of the 1940’s. For us theme park junkies, there just isn’t a lot of information available on Walt’s activities at Disneyland. Granted, Disneyland and the plans for Project X only took up about thirteen years of his life.

It is a very compelling, detailed and well-documented work. You will learn a lot (I did) and will leave the book with a greater appreciation for the fact that the Disney Studios were never quite solvent until after Disneyland.

2 thoughts on “Daily Figment 112 – Walt Disney: The Triumph of the American Imagination”