has just been released for next-gen video game consoles. Not quite as hyped as Halo 3 (yes, we did Finish the Fight!), Rock Band is being anticipated by more gamers simply because the play is so much more intuitive and easy to grasp. A good friend of mine bought it today and gave it two very sore thumbs up (and eight sore fingers)!

So, what is the Disney connection? 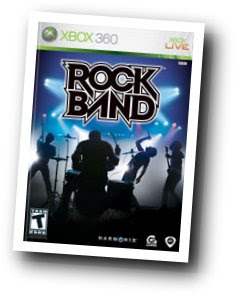 Before Harmonix became uber-famous from creating games like Guitar Hero

, they did a little work for the Mouse.

In their own words:

Harmonix was founded in 1995 by Alex Rigopulos (CEO) and Eran Egozy (CTO), who met while working in the computer music group at the MIT Media Laboratory. Alex and Eran formed Harmonix initially not to develop videogames, but rather to create new ways for non-musicians to experience the unique joy that comes from making music. Before developing videogames, the company created interactive music attractions for theme parks, including Disney’s Epcot Center, and other location-based entertainment venues. These exhibits allowed users to improvise music simply by moving their hands in the air.

After much scouring, I was never able to put my finger on exactly what they had done. I assume that it is from the Imagination Pavilion Image Works area. Probably the What If Labs. But then again, I will wait until I hear from Lou or Jeff! When we visited the Imagination Pavilion in 2004, the five year-old had the best time playing in the What If Labs. Many of the attractions made music and sounds, but I can’t put my finger on anything that allowed you to play music by waving your arms.

I wonder if this one will be waiting under the Christmas tree this year?