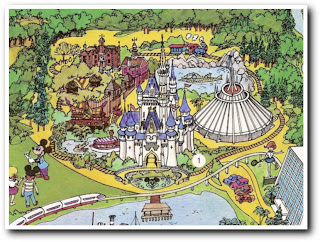 Obviously, this is a close-up of the map that we looked at on Thursday. This section of the guidebook is dedicated the Magic Kingdom. Not the one we know today, but one from over twenty years ago. At this time, they were still using the ticketed system and not only do they publicize their biggest and most iconic rides, they mention If You Had Wings–a free attraction, sponsored by Eastern Airlines.

What in the world did people do before Splash Mountain, Epcot, the Disney Hollywood Studios and the Animal Kingdom? Sit in their hotel room all day?