From the 1976 The Story of Walt Disney World

WALT DISNEY WORLD is a completely new kind of vacation experience. Here you’ll find the Magic Kingdom theme park – with all the fun of California’s Disneyland and many more new attractions created especially for Walt Disney World. And that’s just the beginning, for Walt Disney World is a place to play and a place to stay. Here you can ride a swift monorail train right through the heart of the Contemporary Resort Hotel … swim and sun at the beach and pool of the Polynesian Village Resort … sail for miles over cool lake and blue lagoon … play golf on championship courses that challenge the pros … follow the trail to the recreation world of the Fort Wilderness Campground … see top stars of the entertainment world performing on-stage nightly … join in the Hoop-Dee-Doo at the foot-tapping Pioneer Hall western hoe-down.
These are just a few of the adventures awaiting you and your family when you visit Walt Disney World – a new kind of destination-resort. Come for the day … or better yet, plan to stay and enjoy it all during your next vacation. Here are some of the exciting activities, attractions and entertainments in The Vacation Kingdom of the World.
–p. 11, The Story of Walt Disney World 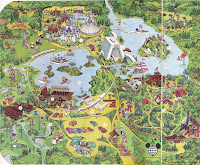 This is a fun, caricature type map with a 1976 copyright. There are several editions of the book floating around and a lot of them are from a 1973 printing. Either way, it is a must have for any Disney Geek’s collection. Artistically, this is a great period piece. If you look closely enough at the gentleman to the right of the Transportation and Ticket Center, he is taking a picture of his family. Now, look a little closer at his wife’s pants. Can you say 1976?

Fellow blogger and Disney Ph.D candidate Foxxfur, from Passport to Dreams Old & New, was fortunate enough to receive a 1971 copy of this book. She scanned a copy of the map which shows two un-built hotels and the Western River Expansion. When you look at the image she provides, the difference is amazing. It is much more primitive and stylized towards a more colonial feel–dare I say American Primitive? I’m sure someone will correct me (it does look like it has a Mary Blair influence). It would also lend itself to the fact that the United States was heading towards its Bicentennial Celebration of 1976. How better to celebrate with the country than to dedicate a land to it. It is on record that Walt always wanted a version of Liberty Square at the Disneyland Park, but never found the space, time or money before his passing. During the planning stages of Walt Disney World, the Imagineers would have had Liberty Square as a priority for the fledgling vacation kingdom. I think it ties into the 1971 map very nicely.

Looking at the 1976 map, you get a sense that Walt Disney World has become a vacation spot. Not only does it have a proven track record after five years, but they have cemented plans and moved forward with the initial phases. Unfortunately, we lost the Venetian, Asian and Persian hotels with the energy crisis of the mid-1970’s.
And look at how much fun everyone is obviously having!
There is a lot of emphasis on recreational activities: boating, fishing, golf, tennis, hiking (?) and horseback riding. Seeing as how Disney was trying to position Walt Disney World as a vacation kingdom, there needed to be a reason to spend more than a few days exploring the Magic Kingdom. Looking back at the 1971 map, the main focus would be on the hotels and the Magic Kingdom. The Imagineers were confident that their guests would represent a majority of the population of Florida: retiree’s and snowbirds. Boy were they pleasantly surprised.
Next in the series: The Magic Kingdom Theme Park
Don’t forget to stop by our site and leave some Disney Geek love!