I‘ve never been one to shy away from exploiting my kids.

Let me re-phrase that: I’ve never been shy about sharing my kid’s with the world (ed. note: they will be ruling the world someday–you might want to get used to them). Over the past few days, Sumner has been talking about the Buzz Lightyear ride. Actually, he has been begging us to take him there. He has been relentless over the past few days. So, I figured that I would put him to work.

Yeah…he is definitely a Disney Geek In Training. The blue roller coaster is what my kids call the Tomorrowland Transit Authority. We rode it four times on our last trip. 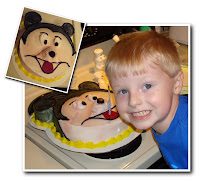 Here is a shot from his fourth birthday from a few weeks ago. A local bakery made the cake. Yeah, I know. It looks like a vampire with small, round ears. But he adored it!

So, would ride Buzz Lightyear after hearing a four-year old describe it?