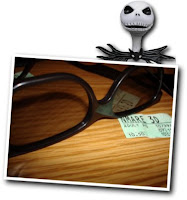 Whew. This was a movie that was made for 3-D. Granted, it didn’t quite pass the eight- and four-year old test. After about fifteen minutes, Connery and Jessica (Disney Geeks in training) thought that their glasses had broken. I know that I will take some flak for this, but there is a reason I have only seen this film three times.

The positives first. It is mind-blowingly beautiful in 3-D and Danny Elfman’s soundtrack has some good tunes. What’s This and Kidnap the Sandy Claws are the soundtrack’s standout songs. The characters are very well developed and you believe in them as characters–not just as stop-animation figures. You empathize with Jack when he discovers Christmas for the first time and you know what Sally is going through with her unrequited love for Jack. And it looks so good in 3-D.

Now for the negatives. The film is way too long and the story drags for most of the film. Cutting out a few of the songs and expanding the final fight with Oogie Boogie would have added a lot. Also, the theme of love completing you should have been woven a little brighter into the plot. You get the idea from Jack and Sally; Dr. Finklestein and his new assistant; and from what is actually missing to make Christmas special; but it just isn’t that apparent.

So, don’t hate me. I still think you should see the movie, but mainly for the way the film makes the incredible transition into 3-D.

Nightmare has become a cult classic and it does have its merits. If you didn’t get to see Meet the Robinsons

in 3-D, this is a good film for the experience. Beware, though, the theater may charge you an additional fee for the glasses