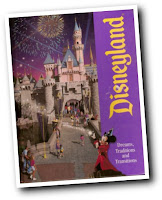 is similar to yesterday’s book update. It is a large scale, glossy title that was sold mainly as a souvenir guide at Disneyland. It was released in 1995 to celebrate the 40th Anniversary of Disneyland. I love the souvenir guidebooks and this one is great because it covers more than just the park. It goes into detail about Walt, his legacy and the future of Disneyland. But no spoilers here.

It has a really great chronological spread that details all of the changes (rides, shows, lands, etc.) that have taken place over the past forty years. And some really great pictures!

One thought on “Book Update”