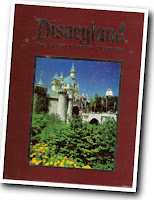 This is one of my favorite types of Disney related books: the in-house produced PR piece. Mainly sold at the park, Disneyland: The First Quarter Century celebrates the first twenty-five years of Disneyland; from its inception to 1979.

Before the publishing boon of the mid to late 1990’s, not many books were available about the theme parks. I have a large collection of these books from Disneyland and Walt Disney World. In their earliest incarnation, they were released to mark special occasions. Now Disney has started releasing them on an annual basis. They are great souvenirs of your trip and often focus on the history of the parks and the current rides. One of the best things about this type of book is that there is great photography–often pictures that only a professional can capture. They are great for daydreaming about your next trip. I suggest you read one and call me in the morning!

Make sure to pick one up on your next vacation.