We haven’t covered the Animal Kingdom very much at Imaginerding. Not that we don’t love the park, there just isn’t as much published material about it. I do have a great book published in 1998 called Disney’s Animal Kingdom

by Melody Malmberg. It is a fascinating read that really goes into the detail of creating a park. The only title similar to it is Walt Disney’s EPCOT Center

, which was published in 1982, and is one of our favorite resource books. If you have any interest in raising your Disney Geek status, either book will do just fine (and once you turn in your written report, we will mail you your official Disney Geek Certificate!). Also, most of my pictures of the Animal Kingdom have my family standing in front of big, green leafy things. Go figure.

Creating a master plan for Disney’s Animal Kingdom Theme Park began almost as soon as the designers convened for the first time. In the earliest design phase, all ideas were out on the table. A mature park 20 years from opening date as laid out in its ideal form.

Wetlands-Boggy Creek on the west and Reedy Creek on the east-hemmed in the long and narrow park site on both sides. Planned and existing roads, visual intrusion from off-site high-rises, and natural features like existing trees helped dictate the layout of the park.

Starting at the center, with the Tree of Life, project landscape planner John Shields determined how much land was needed for Safari Village, then drew the inner edge of Discovery River. The width of the river determined the placement of the “lands” and the service road, a ring road that circles the park and lets employees move around “backstage.” Far from defining the perimeter of the park, the service road is considered movable; it can be located even farther out if more land is required within its bounds.

When designing the appearance of Camp Minnie-Mickey, a land conceived while the park was being built, Imagineers consulted the master plan. Since the camp was located just the north of the unbuilt animal fantasy area, the theme for Camp Minnie-Mickey had to serve as a bridge from Safari Village to the planned home of mythical beasts and legendary creatures. The solution, an Andirondack-themed area will harmonize with both neighboring lands. 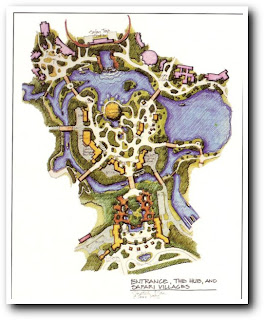 The team planned well, utilizing the wetlands to the west and the Disney tree farm in the north to expand the views of the African savannah off¬site. But masterplans are not foolproof. A deep corridor of utilities was installed underground, skirting Discovery River. In the master plan, the Asian safari was located well out from the utilities but it was shifted closer to the river as the concept changed from expansive river safari to white-water thrills. It was impossible to build the massive Asia mountain over the utilities, so the lines had to be dug up, structurally supported, and reburied before construction could begin.

I like this example. Even though the Imagineers had pretty concrete plans, they were still able to roll with the punches, change their plans and try to do what is best for the guest. In hindsight, we can see where things have changed, but to know that so many plans and ideas existed brings hope to this Disney Geeks heart.

One thought on “Daily Figment 85 – The Grand Master Plan”