Do you know the background behind the two columns that reside in the Italy Pavilion at Epcot Center? 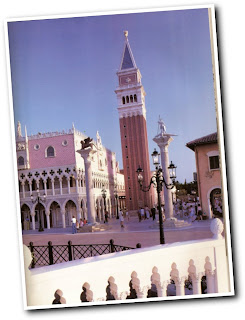 The columns at Epcot are replicas of the columns of St. Mark and St. Theodore that reside in Venice. The columns were brought to Venice in 1125 by Doge Michieli from what is now Lebanon. Originally, there were three columns, but upon unloading them from his ship, one fell into the sea and was lost. Therefore, we are left with two unbelievable pieces of art that the Imagineers used as their models. Of course, the Imagineers took a little creative and artistic license and switched the placement of most of the buildings in the piazza. The columns at Epcot Center are on the opposite sides from their placement in Venice (i.e., the column of St. Theodore is on the right side at Epcot and the left side in Venice.)
Doge Michieli had one statue adorned with a likeness of the first patron saint of Venice, St. Theodore. The second was fitted with the winged lion of St. Mark, who later replaced St. Theodore as the patron saint of Venice. 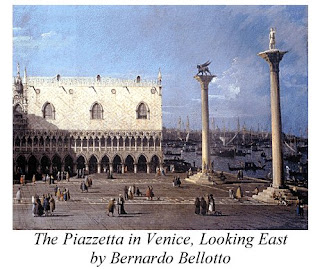 The statue of St. Theodore is actually a composite of several people, but is widely believed to be Saint Theodore of Amasea. He is resting his foot on an crocodile, which some believe to be a nod to his triumph over Egypt and some say it is a an homage to St. George the dragon slayer.

On another note, it is rumored to be bad luck to walk between the two columns in the real Piazzetta in Venice. At one time, the space between the columns was used for public hangings. Maybe that is why the Imagineers flipped the placement of the two columns at Epcot.