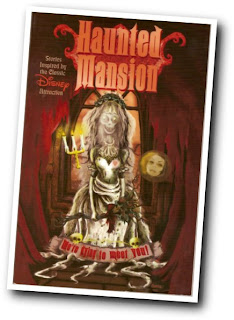 Good friend, Matt gave me a copy of the Haunted Mansion

comic book the other day.

What a great read!

Jeff Pepper at 2719hyperion.com did a review that garnered quite a bit of attention from comic book and Disney fans alike. He makes some really valid points about the book.

I found that I liked about half of the stories in the book. A few of the art styles were hard for me to follow and some of the stories seemed to just take up space. I did have a few favorites and those were the stories that followed or expanded on the known mythos of the Haunted Mansions.

The story that centers around Claude Coats and Marc Davis is my favorite. They are portrayed as two mischievous and slightly evil architects that work feverishly to design the Mansion for Master Gracey. They include hidden areas, traps and pratfalls. Ultimately, their own traps become their undoing. I won’t spoil the ending for you. 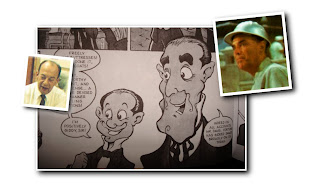 Another short story involves a ghost’s first visit to the Mansion. He silently travels the ride scene-by-scene. What I like about it is that it illustrates one of the fan-based parts of the attraction. After being frightened by the ghost bride, the ghost jumps out of the attic window backwards.

I have always enjoyed this part of the attraction even though it was not intended as a part of the storyline. As I see it, this is how we are supposed to feel when we are on the attraction. As we ride in our Doom Buggy, we are so frightened by the Bride that we jump out of the attic window backwards, thus falling to our deaths. When we enter the happy graveyard scene, we are welcomed as one of their own. We have passed over to the spirit world at that point. That is also why the caretaker and the skinny puppy are frightened by us when we pass them in the Doombuggy, right before the graveyard scene. Just one Disney Geeks opinion, though!

If you are a fan of the Haunted Mansion, you will enjoy this collection. I am looking forward to buying the other compilations, as well.