Jacob and Wilhem Grimm were born in 1785 and 1786, respectively (must not have been a lot to do back then) near Frankfurt, Germany. The Brothers Grimm were responsible for recording many of today’s fairy tales. Prior to the early 1800’s, most of the fairy tales were oral. It wasn’t until the early 1800’s, when the Brothers Grimm entered college, that they decided to write down all of the fairy tales they had heard throughout the years.

Snow White was one of their more famous tales, along with: Cinderella, Little Red Riding Hood, and Sleeping Beauty. There are more than 200 stories in their first seven editions. Of course, Snow White was not only Disney’s first full-length animated film, but it was the first one ever produced. The film also won an honorary academy award for Walt Disney and was also the highest grossing film of all time–until Gone With The Wind was released. 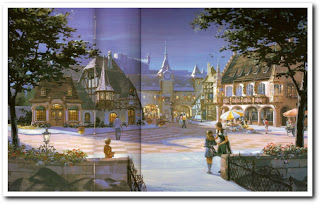 In preparation for this film, Walt knew that his animators were still having problems drawing the human form. He pushed them to create lifelike movement by practicing with the Silly Symphonies. The release of The Goddess of Spring shows the first attempt by Disney at a fluid human form.

Of course, I know that all of you are humming Someday, My Prince Will Come.
Don’t forget to stop by our site and leave some Disney Geek love!