Walt had the idea that guests could feel perfection. I once complained to him about the construction of some new stagecoaches. Walt had asked that the cab be suspended by leather straps as early western stagecoaches had been. I thought that this was too much and told Walt, “People aren’t going to get this, it is too much perfection.” “Yes, they will,” he responded. “They will feel good about it. And they will understand that it’s all done for them.”

-John Hench reflecting on the attention to detail that submerges visitors into Walt’s world of fantasy. From Designing Disney 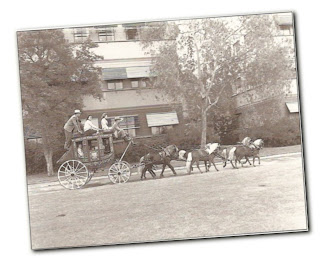 A recurring theme with the Disney Geeks is to stop and notice the magic that is happening all around you in the parks. What a great quote to support this concept! The tiniest details that go unnoticed by so many are still subconsciously working at creating an appreciation for the Disney parks that no other competitor has ever been able to match. A lot of the details put into the parks by Imagineers are there just for us. Something to make our vacation that much more magical.

The picture above is Walt Disney riding a stagecoach at the Disney Studios. It is from the book Window On Main Street

ADDENDUM: Major Pepperidge, over at Gorilla’s Don’t Blog, put up a great post about the Frontierland Stagecoaches at Disneyland in 1955. Major has some terrific shots that he spotlights from Disneyland’s early years.

Check him out and share some Disney Geek love with him!