For our second Meet Our Neighbor interview, we decided to tap one of our favorite bloggers, podcast guest (what do you call him, Lou?), font of insane Disney knowledge and all around great guy: Jeff Pepper.

I remember the first time I heard Jeff on the defunct Mousetunes podcast. Lou had him on the show and they did an early verion of a DSI–Disney Scene Investigation–about the MuppetVision 3D attraction at the Disney-MGM Studios. I remember it vividly because it was the first time that a podcast made me laugh while driving home from work. Thanks goodness I don’t drink milk and drive! 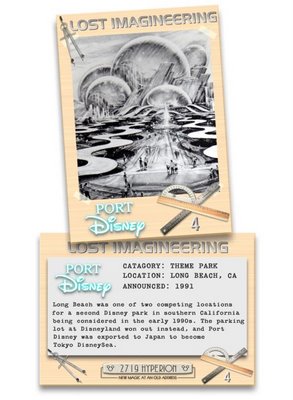 If you read the Disney Geeks blog, I am sure you are well aware of 2719 Hyperion. Theme Parkeology, Lost Imagineering, Snapshots and What a Character are just a few of the topics about which Jeff rhapsodizes. He is a Disney animation buff and a great writer. And if you listen to the WDW Radio Show, you will often hear Lou bow in deference to Jeff’s knowledge (but not too often).

On with the questions!

My earliest memories are of watching the Wonderful World of Disney every Sunday evening and reading Disney comic books. My first trip to WDW was in 1973 when I was twelve years old.

Sorry, I can’t pick just one. While it’s now definitely showing its age, Star Tours totally blew me away when I first experienced it at Disneyland in 1989. All of the first generation Future World attractions are favorites and I’ll no doubt be predictable by singling out Horizons. The original Magic of Disney Animation

tour that debuted with Disney-MGM Studios and featured Walter Cronkite and Robin Williams was akin to a religious experience—seeing Rollercoaster Rabbit go through its various stages of production was simply amazing. I have to say that Soarin’, Mickey’s PhilharMagic, Gran Fiesta Tour and Everest are among my current favorites. I first rode Pirates of the Caribbean in 1976, and it is still my hands-down favorite Magic Kingdom experience.

Again, can’t pick just one favorite Disney movie. Snow White, Fantasia and Pinocchio represent the pinnacle of Disney animation. Personal favorites? Three Caballeros, Melody Time, The Rescuers Down Under. Live action? The Parent Trap. Mary Poppins is brilliant and in a category all too itself, as is Who Framed Roger Rabbit. And Toy Story 2, for my money, is one greatest movies ever made, animated or otherwise.

Non-Disney—that’s a lot easier. Peter Jackson’s Lord of the Rings trilogy. And John Ford’s The Grapes of Wrath.

Again, apples and oranges. But EPCOT Center is definitely a sentimental favorite.

Goofy, especially in his Sport Goofy and George Geef incarnations.

Baroque Hoedown from the Main Street Electrical Parade. Pure magic and it encapsulates so many other classic Disney tunes. 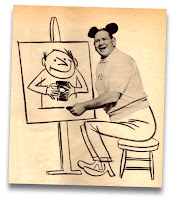 Roy Williams, the big “Moose-keteer,” for everything he was witness to. He started at 2719 Hyperion in 1930 and was a key studio animation talent. He continued in television with Mickey Mouse Club, and hung out an awful lot at Disneyland during its first decade.

The BBQ ribs at Flame Tree Barbeque at Animal Kingdom.

The lobby at Wilderness Lodge.

For food—Boma at Animal Kingdom Lodge.

For fun—Chef Mickey’s at the Contemporary.

See Spaceship Earth without the wand and experience the new version of the attraction.

6 thoughts on “Meet Our Neighbor!”