I don’t agree with updating the movie portion of the Star Tours attraction at MGM. I think we need a different experience all together.

There has been a plethora (heh, more than 2?) of Star Tours postings over the past few days.

My initial thought was yes!

Star Tours was wonderful for its time, but for reasons that are unique to when it arrived on the scene.

Let’s step into Lou Mongello’s Wayback Machine (he is letting us borrow it for this posting) and head to 1989. 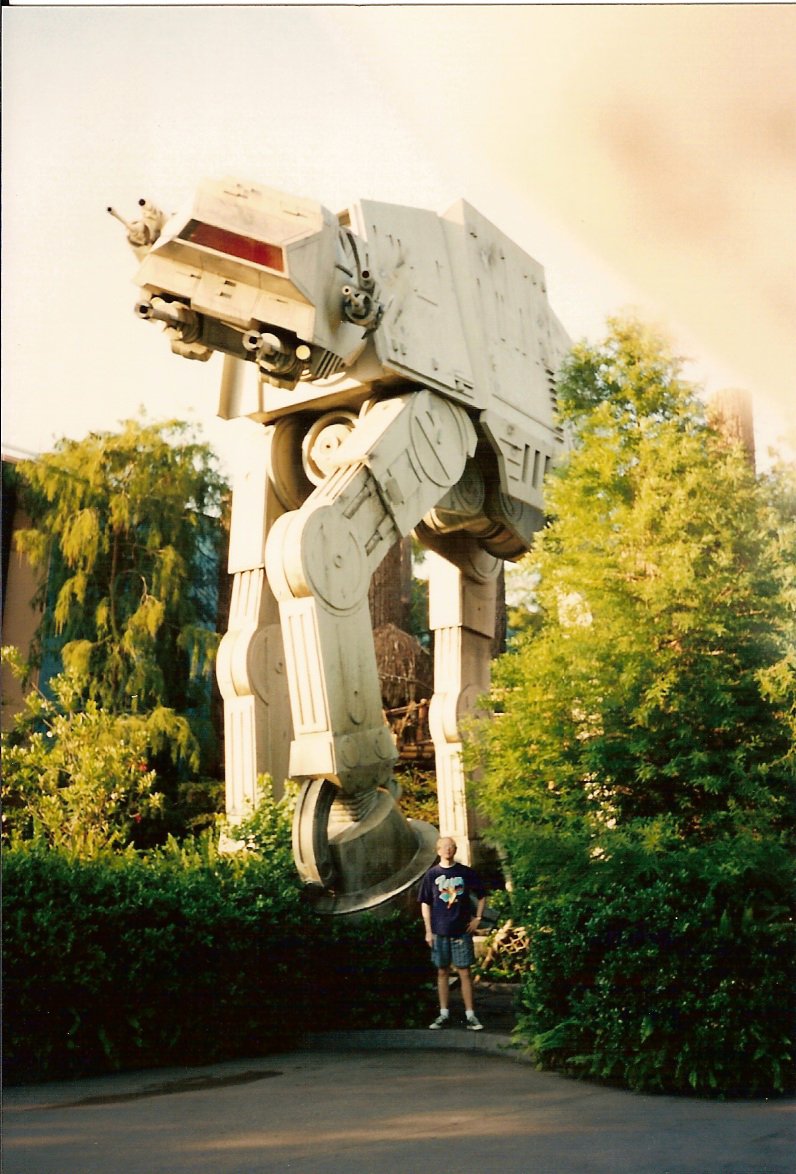 Well, what about May 1994? Yeah–that was this Disney Geek’s first trip. ZAP! Dang, Lou really needs to fix this thing. Ok, Sunday, May 15th. Surprise Morning at the Disney-MGM Studios. We were there about 8:30am. We headed right for Star Tours. We rode it four times without stopping.

But really, I was kind of disappointed. I mean, overall I was thrilled; but there was this strange disconnect between Star Wars and Star Tours. Let me set the scene.

As you first approach, you see a humongous AT-AT Walker looming in front of the building. Wow. On the inside of the queue, you see Mon Calamari, C3-PO, R2-D2 and the Starspeeder 3000. The first part of the area is rather large. The next part of the queue is a little smaller, but you are on ramps and there are droids and droid parts all over the place. Finally, you reach the embarkment area and you have a short wait and watch the safety video. Then you board. The excitement is there–especially for first-timers–but that is where the disconnect starts.

It just doesn’t feel like Star Wars to me. First there is the underwhelming sense of scale. You approach a huge AT-AT. You stand in a huge waiting area. Finally, you are seated with 40 other travelers in a small and enclosed StarSpeeder 3000 and the mayhem ensues. To this day, the best part of the ride is the Star Wars fanfare that plays as you exit the vehicle. The absence of branded Star Wars characters in the attraction (except for Art00) and the lack of a visceral Star Wars experience kind of let me down. I understand that Lucas didn’t want Darth Vader in the attraction–but it would have been so amazing to have him pursue us and keep us on the edge of our seats (Vader, not Lucas). Why not a fly-by with the Millennium Falcon…or re-theme the cabin to be the hold of the infamous smuggler’s ship. 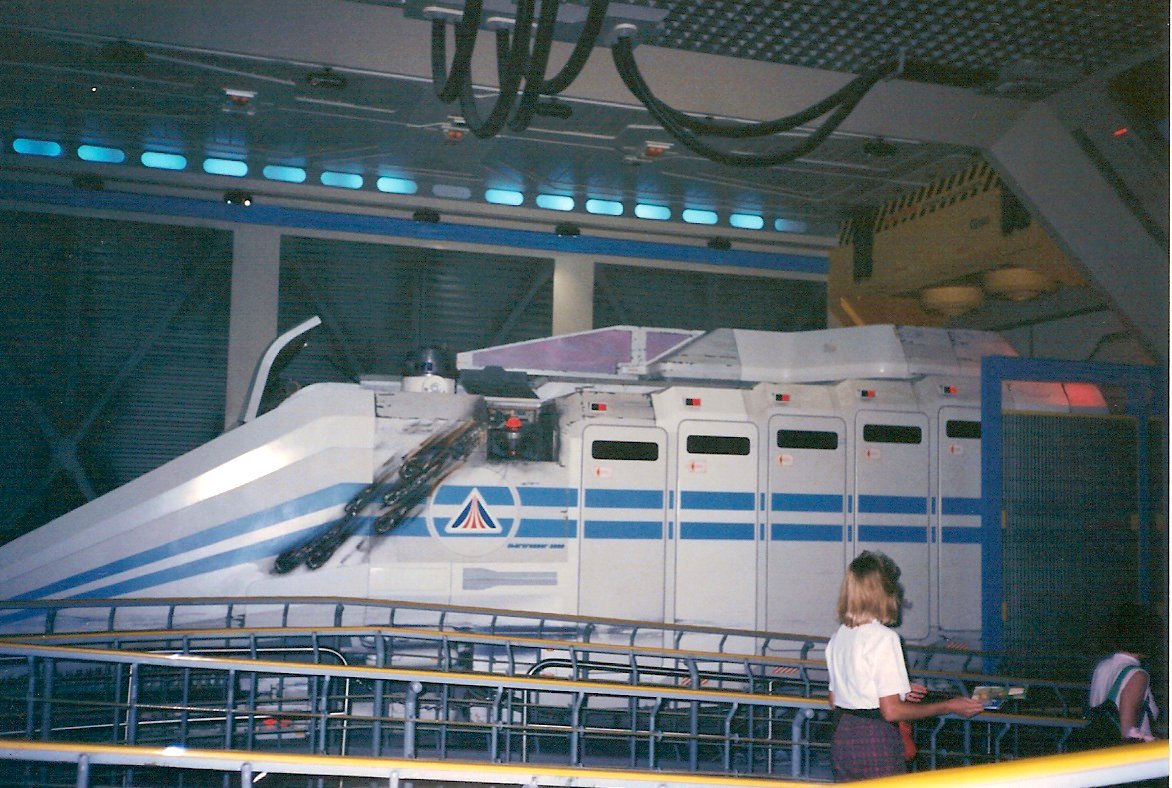 It boils down to a disproportionate sense of scale. Massive AT-AT, large queue area–little bitty ride. Star Wars is massive and overwhelming. The mythology in Star Wars touches everyone. We deserve a ride of equal caliber. Think of it as a funnel. The magic that is Disney comes to life through the way they queue you through the wait with some entertainment. By the time you hit the ride, the fever has risen and BAAM!, the ride is the release that you’ve waited for. In most cases, the queue is such an integral part of the ride that the ride would suffer without it. In this case, the ride would not be Star Wars without it. Should that be the case? Strip Star Tours of the queue and it is nothing more than a space based motion simulator. Ughh! I rode something like that at the State Fair last year.

Think about the Nemo attraction in EPCOT. Most Disneyphiles love the movie and like the ride; agreeing though, that the ride does not do justice to the intellectual property that it represents. Kids, this is Nemo we are talking about. A great movie nonetheless, but not Star Wars in terms of the global effect it had. Since Star Tours arrived, the movies and the surrounding merchandise frenzy have been reintroduced to a whole new generation of kids. The attraction needs to follow along and reintroduce itself in a manner that is more true to the mythology that ingrain the movies so deeply in our collective.

Look at Pirates and the Haunted Mansion (I love the Mansion). They are wonderful attractions with appropriately large spaces. The Ballroom and Graveyard. The battle at the Caribbean fort and the sacking of the town. The town on fire. With Pirates and the Mansion, there is not a large sense of scale from the outside. You could argue that the Mansion is large from the outside, but its scale is much grander inside. Pirates does lead you through the fort and into the caverns before you hit the wide open battle between the ship and the port. So ultimately, you are rewarded with these large spaces and over the top scenes.

Pirates and the Mansion are both wholly owned Disney properties. There was nothing before them to add to the story or the mythos. Star Wars is different. It had a mythos–a fandom related to movies, books video games, television specials (hah!) before the attraction even opened.

See, Disney constantly treads on thin water with their parks because they have to balance the nostalgia that brings back the oldsters and the innovation that brings in the youngsters. They do an amazing job with this dichotomy 98% of the time. The disconnect with Star Tours is that without the character connection to the movies, there isn’t any nostalgia they have to protect. Disney does not have to worry about disrupting fans of Star Tours because I would be hard pressed to find a Star Wars fan that wouldn’t love Star Tours to be more advanced as an attraction and more true to the story.

How would the Peter Pan attraction have fared if the ride portion was about Peter’s cousin Jimmy Pan? You walk through a wonderfully themed queue all about Pan and Hook, and then you hop on the ride portion. Jimmy sets off on an unrelated adventure to the Peter Pan story and the only similarity is that Jimmy’s story takes place in London. Absurd, right? Why would it even be a Pan ride without Pan?

In other words, after the awesome and awe inspiring queue, what makes the Star Tours ride Star Wars?

Ok, Lou–here’s the Wayback Machine. It vibrates a little and I do not know where that scratch came from!

3 thoughts on “Do We Need a New Star Tours Movie?”