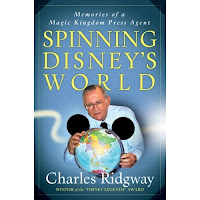 One of the most important things we can do as humans is remember. Sometimes the memories are painful, sometimes they are joyous. When the memories come from one of the largest legends in the entertainment journalism field, they are at the very least significant.

A living piece of our nation’s brightest landmark has delivered a collection of memories that is filled with the same magic that has captured millions.

You get the sense that Charlie never underestimated the importance of what he was helping to build, even though he never directly stated it. You also feel the presence of Walt’s hand in all of the amazing stories. As much as I respect what Charlie has accomplished, his stories have made me realize how important Walt’s ideas and passion are to the everyday success of Disney. I think Charlie would agree that he was a steward of Walt’s, helping fulfill the legacy Walt left behind.

Fortunately, on July 5th, at 7:00pm, I will get the chance to ask him personally. He will be at the Barnes & Noble in Winston-Salem, NC, signing copies of his new book Spinning Disney’s World. Let me know if you would like to ask Charlie a question and I will be your steward.

If Walt was the father of the parks, Charlie was the big brother. Tirelessly promoting the parks not as a job, but as a passion. Charlie was present at every meaningful moment and always stood up for the parks in a way that only a big brother can. This care came unconditionally as the reader can easily sense that Charlie had a passion that he was compensated for as opposed to a job that he loved.